Professor Terry Hughes, who exposed the extent of coral reef damage caused by rising water temperatures, and Britt Hermes, who publicised her research and subsequent rejection of her practice in natural therapies, have each been awarded the 2018 John Maddox Prize for their courage in promoting science and evidence on matters of public interest, despite smears, threats and attempted lawsuits.

Terry Hughes, director of the ARC Centre of Excellence for Coral Reef Studies and a world leading expert on the Great Barrier Reef, is recognised for his tireless and courageous efforts in communicating research evidence on coral reef bleaching to the public and for tackling the misrepresentation of coral reef science. In doing so, he has experienced hostility from politicians, public figures and the Australian tourist industry. In the face of efforts to discredit his research, personal criticism and smears in the media, Terry redoubled his efforts to communicate with the widest possible audience, using diverse means and reaching mainstream media around the world. 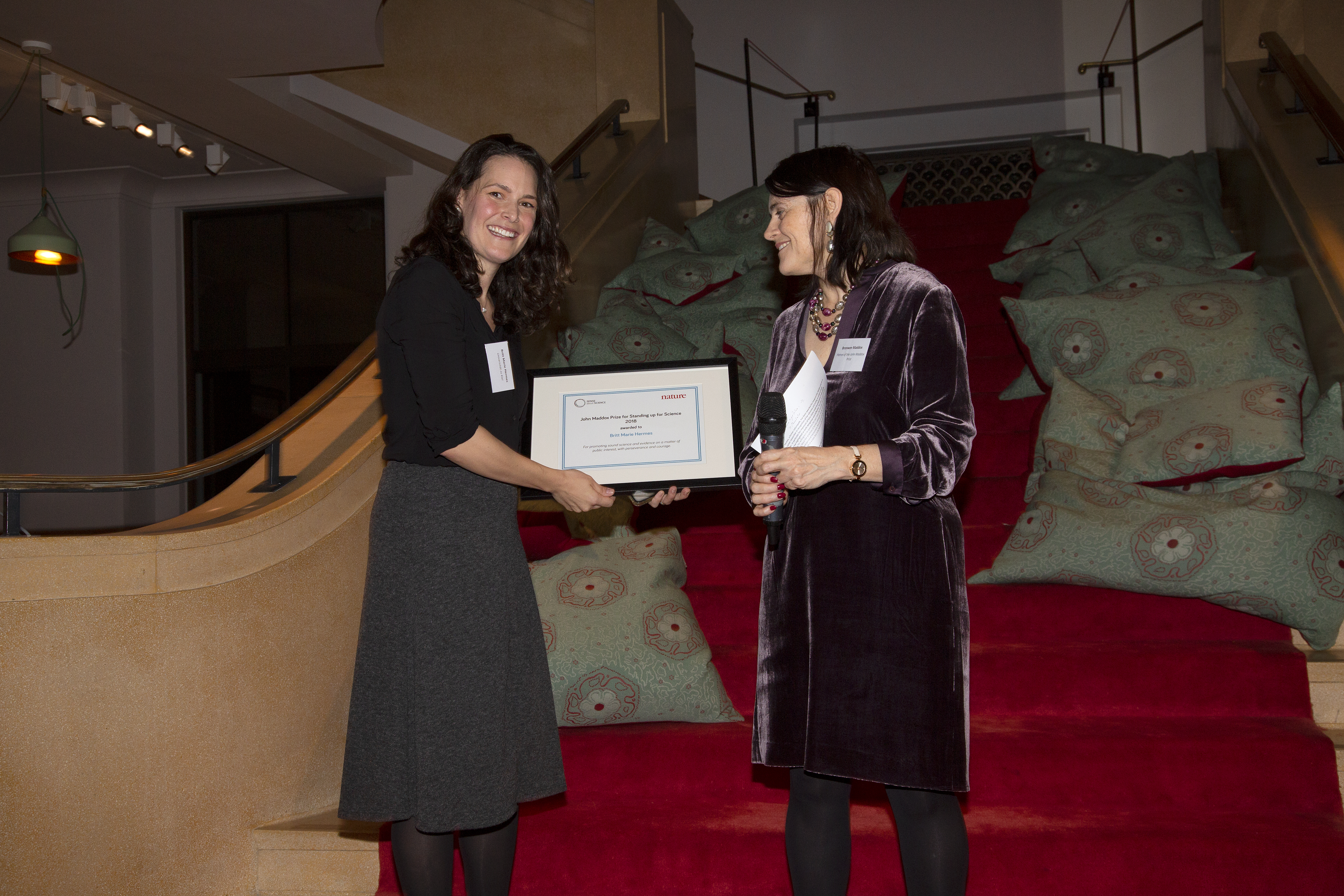 Britt Hermes, a former naturopath, has been awarded the inaugural John Maddox prize for an early career researcher in recognition of her advocacy and writing on evidence-based medicine – in particular her exposure of false claims made by proponents of naturopathy, which she has highlighted as both dangerous and ineffective. The judges were particularly impressed by her willingness to question her own views, the discomfort involved in communicating about the practices of former colleagues, and her continued commitment in the face of lawsuits and personal harassment. She is currently being sued for defamation by an American naturopath in a case due to be heard in a German court this year. 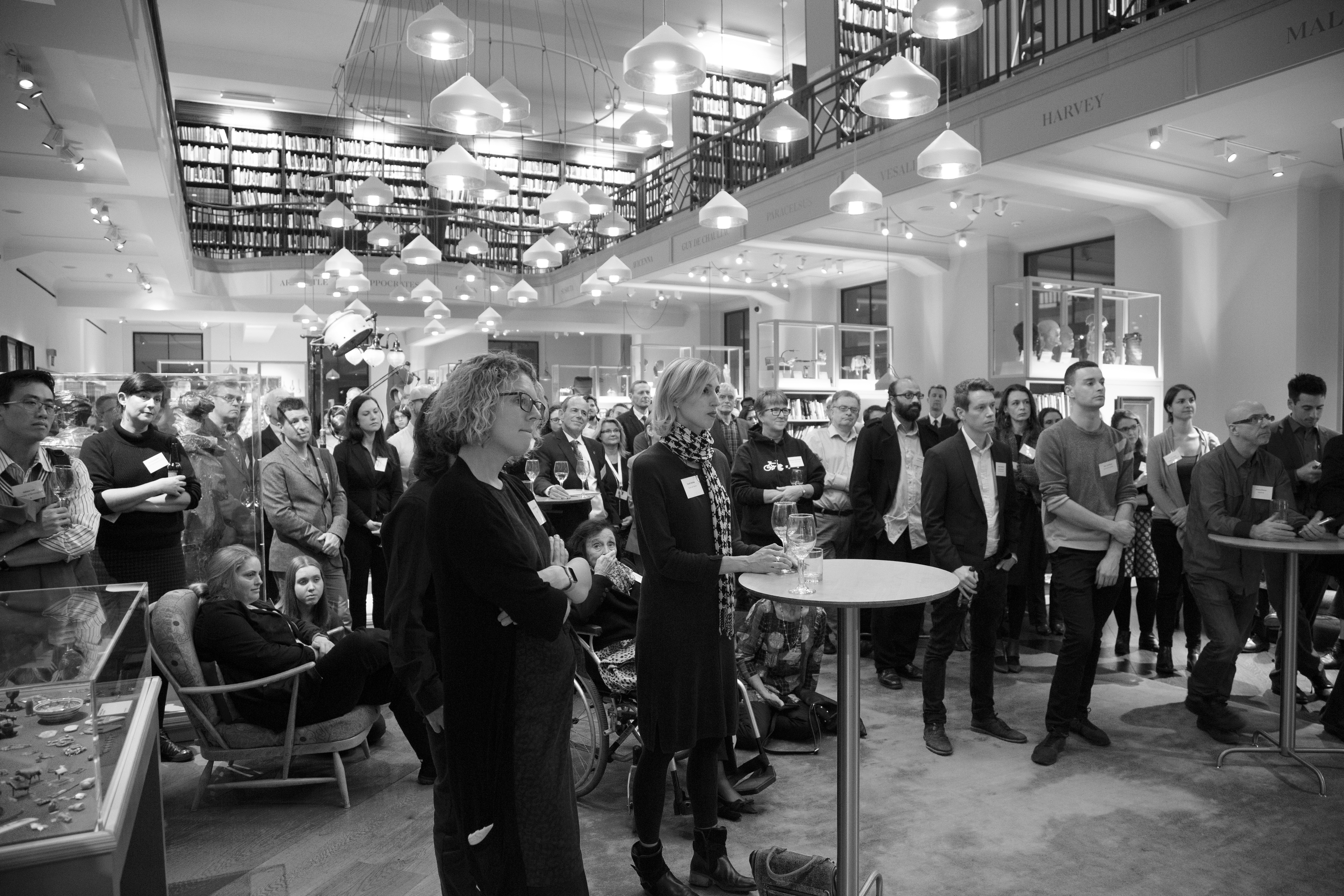 The John Maddox Prize, now in its seventh year, is a joint initiative of the charity Sense about Science and the leading international scientific journal Nature, and is awarded to one or two people a year. This year there were 136 nominations from 36 countries. 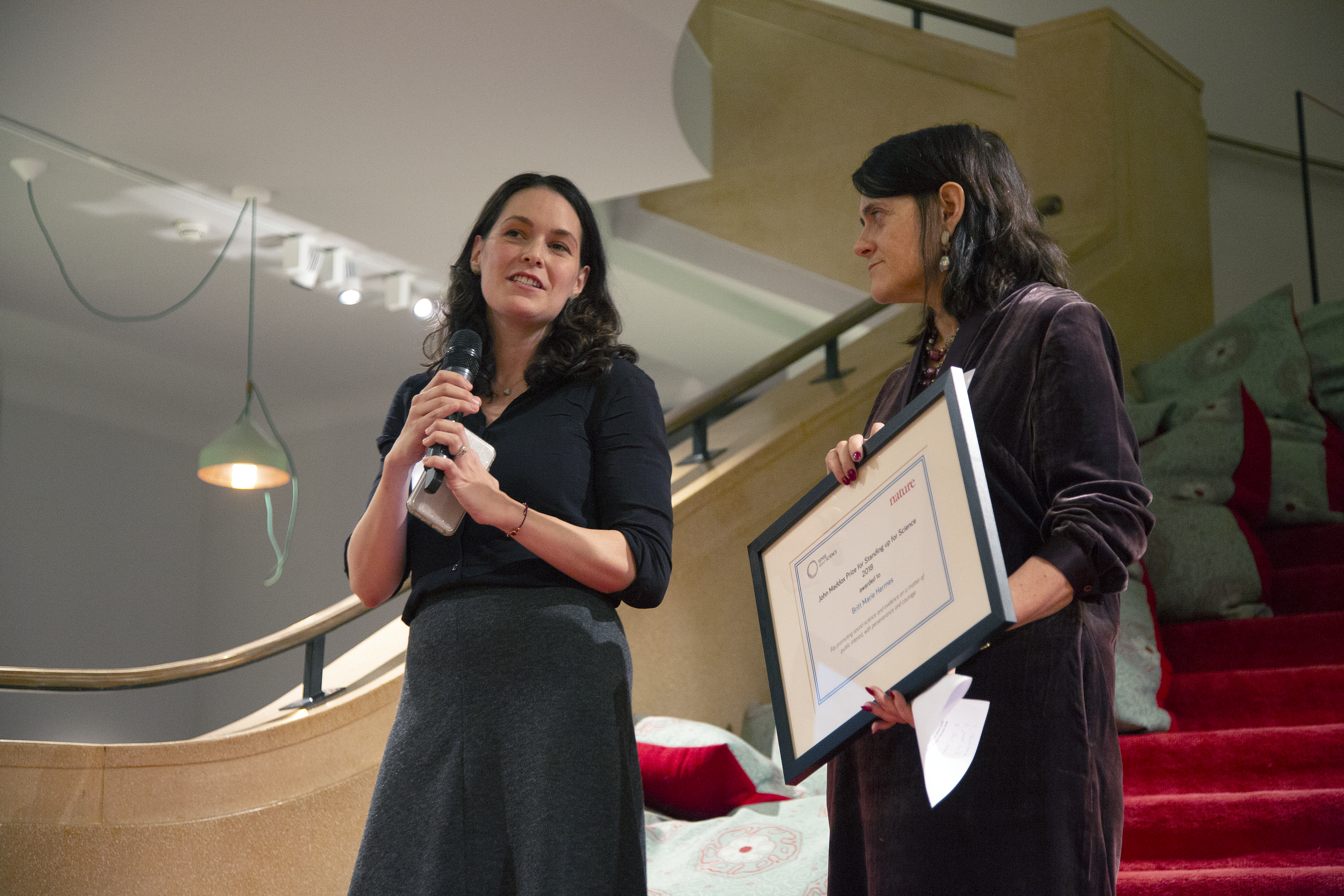 Britt Hermes:  “I was a naturopath, until I looked at the evidence and decided to speak up about the dangerous therapies used in naturopathy, especially those to treat cancer. Walking away cost me my friends. I am harassed and being sued for defamation. I am honoured to be recognised by the scientific community for changing my mind.” 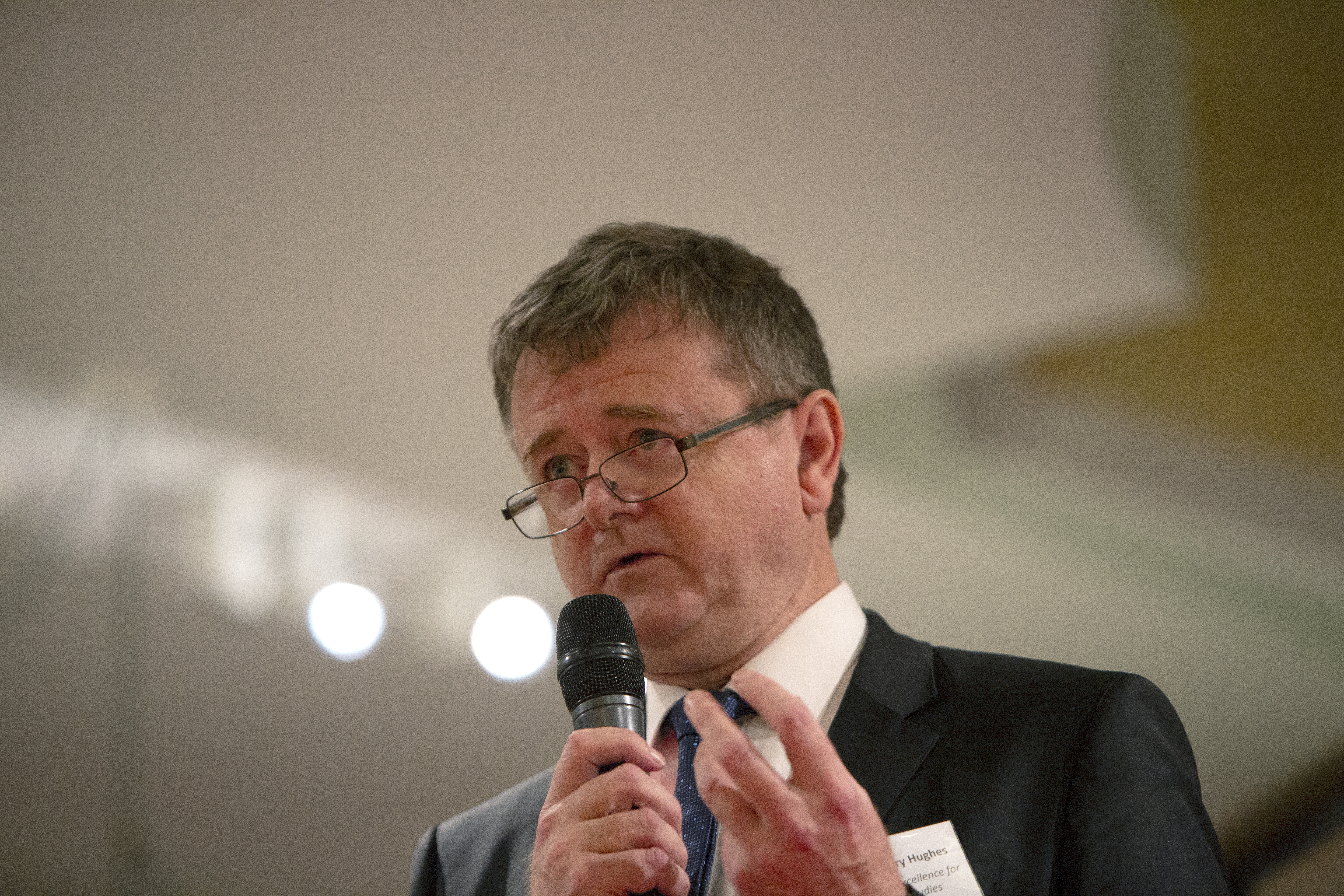 Professor Terry Hughes: “It is a privilege to receive this prize and to express my gratitude – not just for me, but more importantly for future generations, who have the most to lose if we fail to act on anthropogenic climate change.”

The judges noted the emergence of ‘toxic debates’ in new areas of research, such as the evidence for transgender medical interventions, and called for employers, government agencies, funders and professional bodies to do more to support researchers, to ensure the public continue to have access to all discussions about evidence.

They also drew attention to the importance of researchers making themselves personally available to communities struggling with challenging issues. In addition to the two prizes they also commend Tisha Schuller. A thoughtful environmentalist, Tisha left her comfortable environmental consulting job to take a high conflict job with the express aim to deescalate Colorado’s raging oil and gas controversy by helping the public understand the science and risks. She made herself available to her community despite threats against her family and attacks in the media.

Tracey Brown OBE, director, Sense about Science and judge: “The winners demonstrated great integrity in their commitment to public discussion about scientific research. They reflect the values of persistence and honesty that John exemplified. The judges were delighted to award these prizes. We are also worried. While the many strong nominations show that individuals have gone to extraordinary lengths to bring scientific research into difficult public discussions, our public spaces are not close to being supportive enough. It is profoundly against the public interest to have research driven from the public domain by fears of personal attack, legal action or institutional hostility. This prize gives strength to the elbow of those who push forward in difficult circumstances, but we need to see more action to stop it getting that far.”

Magdalena Skipper, editor-in-chief, Nature, and judge: “We received many excellent nominations this year and it was difficult to choose from such an inspiring group of candidates, all of whom are making great strides in their area. This year’s winners were chosen for their exceptional efforts in raising awareness of issues they are passionate about and for which they have faced criticism and adversity in striving for evidence-based policy and practices. The John Maddox prize recognises and rewards those who communicate scientific rigour and we are delighted to be awarding it this year to two notable and dedicated campaigners.”

Professor Sir Colin Blakemore FRS, professor of neuroscience & philosophy, School of Advanced Study, University of London and judge: “The growing numbers of nominations for the Maddox Prize, with so many examples of courageous defence of scientific evidence in the face of prejudice and vested interests, show how important this Prize has become. In an era of fake news and disregard for experts, the Maddox Prize is a beacon for the importance of honesty, evidence and open debate.

“Britt Hermes’ story is one of exceptional courage – not only to realise that naturopathy, to which she had devoted four years of training, was riddled with bogus practices, but then to criticise these practices in the face of abuse and legal actions. She is such a worthy winner of the first Maddox Prize for an Early Career Researcher.”

Lord (Martin) Rees of Ludlow OM FRS, University of Cambridge and judge: “It’s excellent that we could identify two winners who had displayed real commitment in countering public misperception of a scientific issue.”

Natasha Loder, The Economist and judge: “Britt Hermes has fought hard for evidence-based medicine in the face of opposition, and ongoing legal challenges, from the naturopaths that she is trying to expose. All this from someone who is just starting out on a career in science is remarkable. Britt was an outstanding applicant and richly deserved winner of the John Maddox prize this year.

“There have been many outstanding scientists who have, over the years, fought to defend the science of climate change in the face of irrational, climate-change denialists. Terry Hughes stands out in particular for the tireless nature of his contribution by drawing attention to the impacts of coral reef bleaching in the face of hostility and pushback from politicians, denialists and even the tourist industry in Australia. Terry is a worthy recipient of the Maddox Prize.”

The prize is run and funded by Sense about Science, where Sir John Maddox was a founding trustee, and Nature, where he was editor for over 20 years, with support from Clare and Andrew Lyddon.  Special thanks also goes to the Wellcome Collection for hosting the awards ceremony.